Have you got the Windows-as-a-service mindset?

Over the past 20 years, the technology landscape has completely transformed. We’ve seen the emergence of the cloud, the digital workspace, and the increasing prevalence of a subscription-based model of software: software-as-a-service (SaaS).  The software-as-a-service paradigm isn’t just transforming the tools we use but the operating systems they run on.

Windows 10 marks Microsoft’s commitment to Windows-as-a-service. There’s no turning back now, but many businesses are still struggling to get to grips with Windows 10 and its frequent feature updates. For those that are firmly entrenched in the traditional model, Windows-as-a-service takes some getting used to.

In this blog, we’ll explore the change, what that means for you, and what the right Windows-as-a-service entails.

The last Windows you’ll ever need

Windows 10 is, at least for the foreseeable future, the last Windows desktop operating system. There is no Windows 11 on the horizon. Instead of purchasing a new operating system every few years, with Windows 10, businesses now get regular feature updates which happen twice a year at roughly the same time.

“Why is that a good thing?”, you might ask. Let me explain some of the key benefits:

For the last few decades, when it became time to update their employees’ desktops, most organisations would first purchase a new fleet of desktops. Then, they’d invest a lot of people-hours in creating their customised Windows build, integrating applications, and testing. Finally, months or years later, they’d deploy these desktops. This upgrade cycle is often disruptive and costly, but now with Windows 10, the process is continuous, regular and means much less effort is needed to maintain your devices.

It’s often been the case that people have a far better desktop experience on their home computers than they do at work. End-user experience isn’t always very high on a business’s list of priorities and – given the hassle and expense of upgrades – many users are left languishing with clunky, outdated operating systems that were way past their sell-by dates. Think how long many held on to Windows XP before they finally levelled up. With Windows 10, employees can expect the latest, best user experiences and functionality.

With more frequent updates also comes a change to support timeframes, with the necessity of upgrading to avoid falling out of support. Organisations now have a minimum of 18 months’ support for a Windows 10 feature update release, or 30 months for Windows 10 Enterprise’s September release. Although the Windows 10 Long-Term Servicing Channel (LTSC) version has five years of mainstream support, it’s not recommended for general end-users.

Once you’ve gotten the hang of it, the Windows 10 upgrade schedule will soon fall into a familiar pattern of planning, testing, and rollout. As they say, practice makes perfect. And anything that brings added routine and order to your processes is always a good thing.

However, some IT professionals are still sceptical of Windows 10 because they’re concerned that the frequent upgrades could be disruptive, laborious, and unpredictable.

Thankfully, Microsoft has made a series of valuable resources available to help businesses struggling with Windows 10. You can look at them as the three pillars of successful Windows 10 adoption.

Let’s go through them now.

1. The Windows Insider Program for Business

The Windows Insider Program for Business allows you to test-run future builds of Windows 10 before they’re fully released. That means you can identify any future hurdles and learn how to mitigate them before you roll that version of the OS out across your entire organisation. And that doesn’t just mean IT people: tech-friendly colleagues in other departments can also run these beta builds and flag any problems with their department-specific software and processes and have them resolved before the wider rollout.

For example, accounting personnel can test-run a typical payroll cycle on a forthcoming version of Windows, noting any issues they run into. All of this means that IT operations staff can stay in control of their environment and prevent any nasty surprises down the line.

This is all done using deployment rings, where changes are rolled out to certain groups of users/machines in phases. This gradual, controlled and tested rollout reduces any risks or teething problems associated with Windows 10 updates. 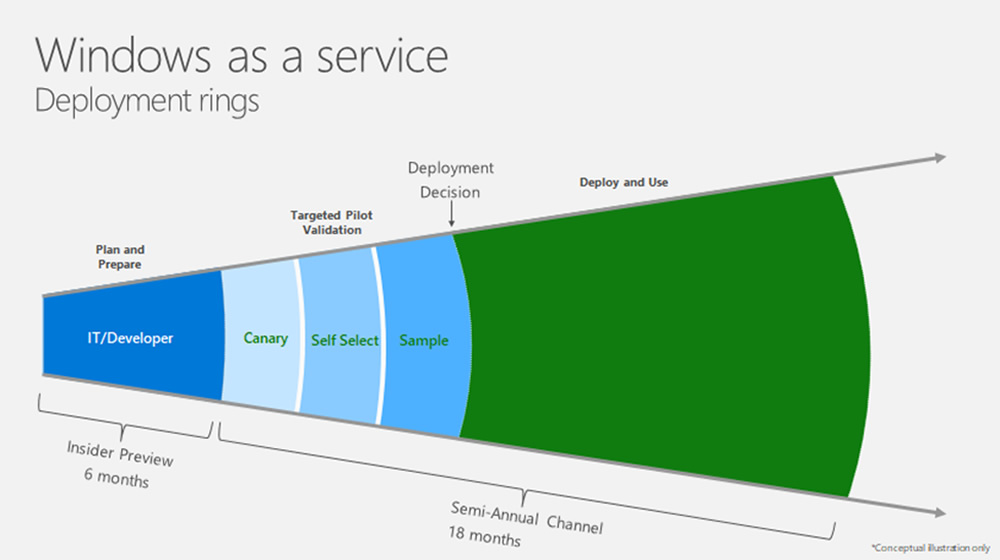 Microsoft’s Desktop Analytics is a rich source of information on what’s happening in your Windows desktop environment. It provides you with valuable visibility into your Windows 10 deployments, what’s on all your machines, and what’s happening across your organisation. If you find any app compatibility issues, you can validate them across a global baseline to investigate the common factors that could be causing them.

For example, you may discover that a particular set of users are having problems with an app since moving to Windows 10. Desktop Analytics shows you what they all have in common: the same set of drivers. Now you know exactly where the problem lies, so you can go about fixing it. Desktop Analytics helps you get through this diagnosis phase as quickly and effectively as possible.

Microsoft is committed to making sure your Windows 10 upgrade is successful. Desktop App Assure shows that they’re going the extra mile by providing app compatibility assistance at no additional cost. If you have a legacy app built for Windows 7, for instance, and you’re experiencing compatibility problems, they’ll fix it for you—completely free.

For example, Microsoft will work with your bespoke line-of-business apps to get them running smoothly again, and they’ll even engage third party software vendors to help with Windows 10 apps. If you’re having problems with Office 365 ProPlus macros and add-ins, Microsoft will also look at those for you. It’s part of their app compatibility promise: ensuring all your vital apps work on the latest versions of their software, and most of all that means their flagship Windows 10 operating system.

Ready to make the mindset shift?

We hope this blog has helped you get into the Windows-as-a-service mindset and updating your digital workplace is now a much less daunting prospect. At Deptive, we understand the challenges that technology professionals face when it comes to change projects—we’ve worked on plenty of them over the years.

If you have questions about how to successfully adopt the Windows-as-a-service mindset, get in touch with our team today.