Discovering the power of Microsoft Power Platform with Dona Sarkar

I’ve heard the name Dona Sarkar quite a bit over the last year. One of our team members, Paul Warren, is a Windows Insider MVP and it seems like every time he talks to Dona, she’s asking him to do some scary presentation at a Microsoft conference or put himself out there! But there’s a hell of a lot more to Dona than just scaring the pants off one of our guys – as I found out when I talked to her recently about the epic Microsoft Power Platform.

Dona is the co-author of the book Model 47: A Startup Storybook, a continuation of an amazing entrepreneurship boot camp for start-up founders in Africa that she’s involved in. She’s also the founder of an ethically-created fashion line called Prima Dona (perfect name!) and most famously spoke at TEDX on overcoming imposter syndrome – something that resonates with me and most of the other entrepreneurs I know.

Dona is now the principal advocate for the Microsoft Power Platform, which empowers non-tech people to build apps and solutions to solve their everyday work problems. She was generous enough to share her time and expertise with us in a webinar recently – check out the full video below or read on for the highlights!

Citing a global shortage of developers as the main driver behind the Power Platform, Dona shared that this cool offering from Microsoft can be thought of as “the front-end of Azure”, simplifying the use of Azure services like Logic Apps, Functions, and the Bot Service.  The Power Platform is currently made up of four components: Power Apps, Power Automate, Power Virtual Agents, and Power BI. Let’s dig into what you can do in each of those.

Power Apps is a low-code app development platform, which is what it sounds like – a way to create apps that can run on any device without writing much code. An app built in Power Apps could track time, expenses, facilities management, or anything else that a business needs. The data is stored wherever you want it (or where it already is, even in an Excel spreadsheet) and the app serves as the place where your team can easily engage with that data. Instead of needing developers to build the app, the team that will be using it can build it themselves. It’s mostly a drag and drop platform – allowing the person building it to easily connect to data sources, change components, colours, and logos without any code. 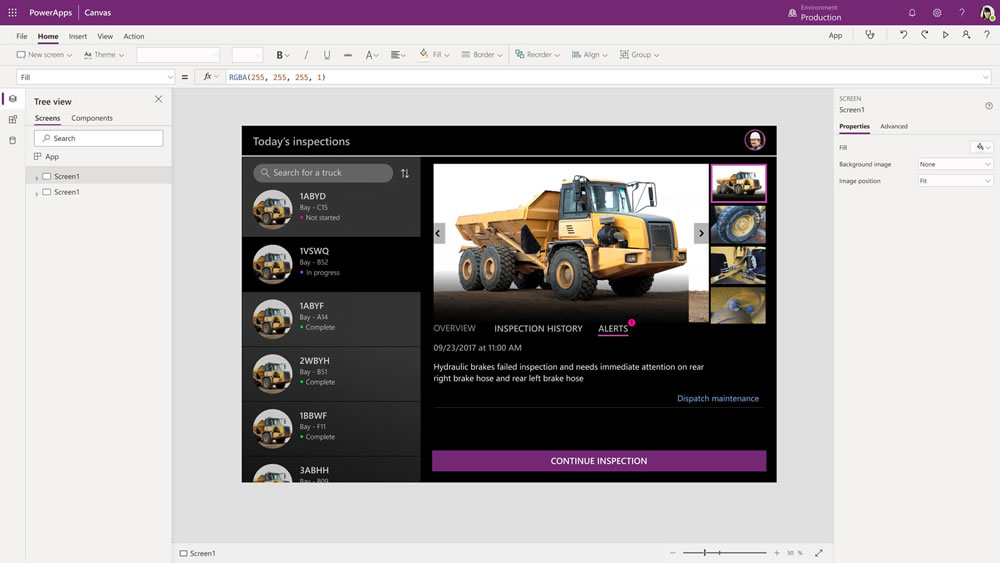 Let’s look at an example – Standard Bank, which is the largest bank in Africa, based in South Africa. A few years ago, the IT team at Standard Bank hosted a hackathon – asking people from other teams to come with their business problems and build solutions to solve those. A young business analyst named Vanessa, and two of her colleagues, noticed that ATM maintenance was not going well.

If someone noticed an ATM was broken or dirty they would call it in; this would then get written on a clipboard attached to the wall. A worker would then call in for the next job and the team answering the phones would work through all the clipboards to find what was geographically closest to where the service rep was calling from. There was no intelligence being applied to decide which jobs were more important, and time was being wasted trying to match up workers with the jobs. Standard Bank was losing millions of dollars by not having workers in the right place at the right time.

So Vanessa is at this hackathon and stumbles upon Power Apps; within two days of the hackathon she and her two colleagues have built an app that lets anyone in the company log an ATM issue. The app sends that info to a central data store (in this case, a simple SharePoint list) and the ATM maintenance workers can then open a different app which shows them what work is to be done. The original app matches the worker and the issue and puts it in their queue; prioritising broken ATMs and those close by to minimise time wasted. Once they finish the job, they check it off in the app and it’s recorded on the SharePoint list as done! 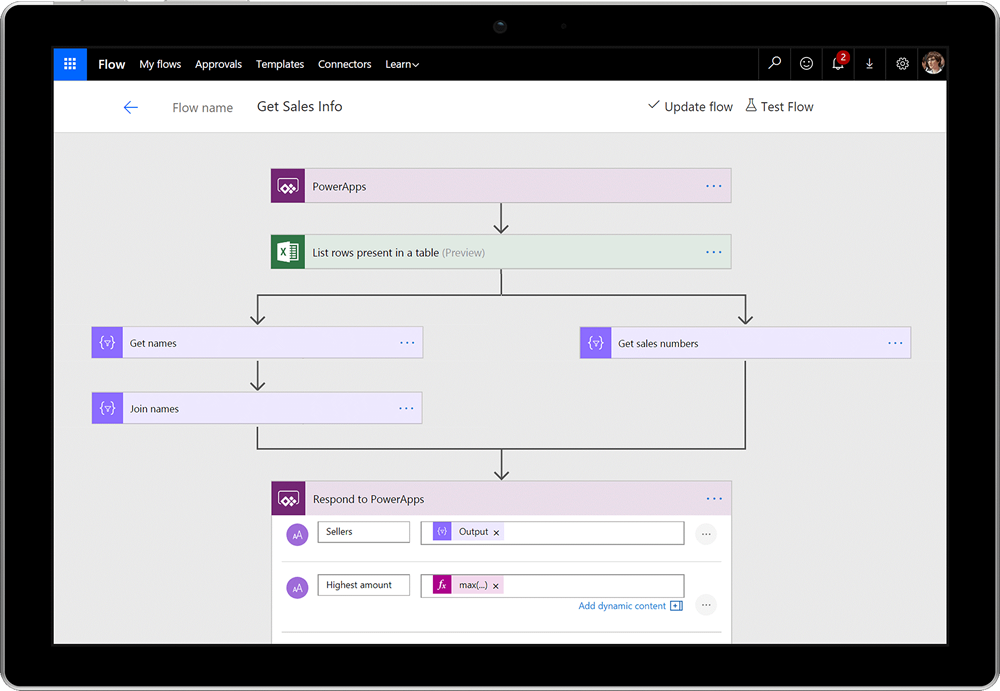 Businesses are able to cut down on manual jobs to increase efficiency and speed up how quickly they can deliver services and products.  Power Automate has flows for business processes, automation, and basic Robotic Process Automation (RPA).

Dona’s keen to tell hero stories of businesses using Power Automate – so if you’ve got a test case that could work, reach out to her on LinkedIn!

The newest member of the Power Platform family is Power Virtual Agents – a low code chatbot to solve common customer, or internal, issues that can be created just from your existing FAQs. This external facing bot lives on your website and can have as much or as little personality as you want. Best of all, you can create one without having to learn cognitive services, use a developer or a data scientist. 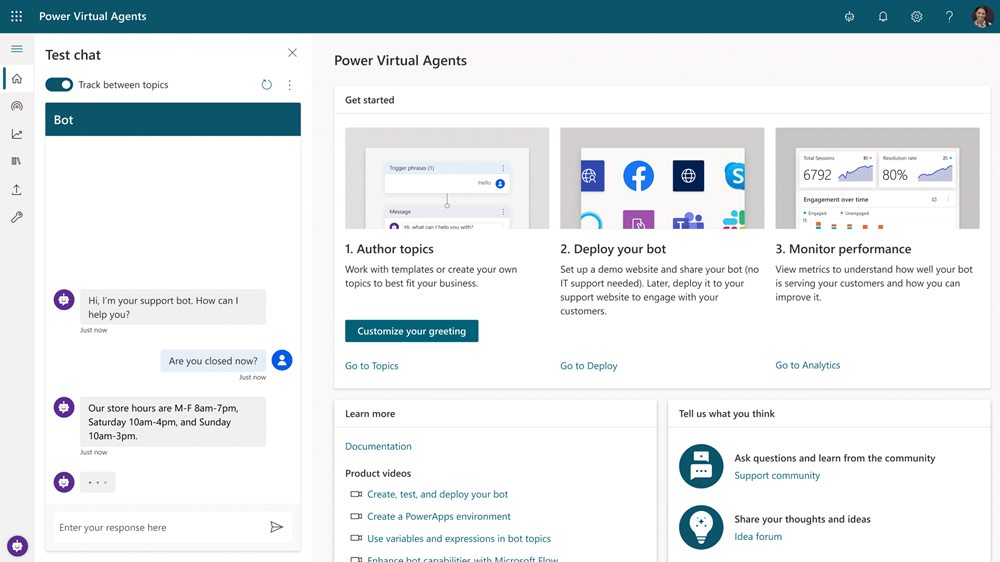 For leaders within the business, Power BI is your new best friend. With dashboards that bring together a bunch of different data sources (for example, all your social media accounts), it gives you one view to show you what’s happening at a glance. 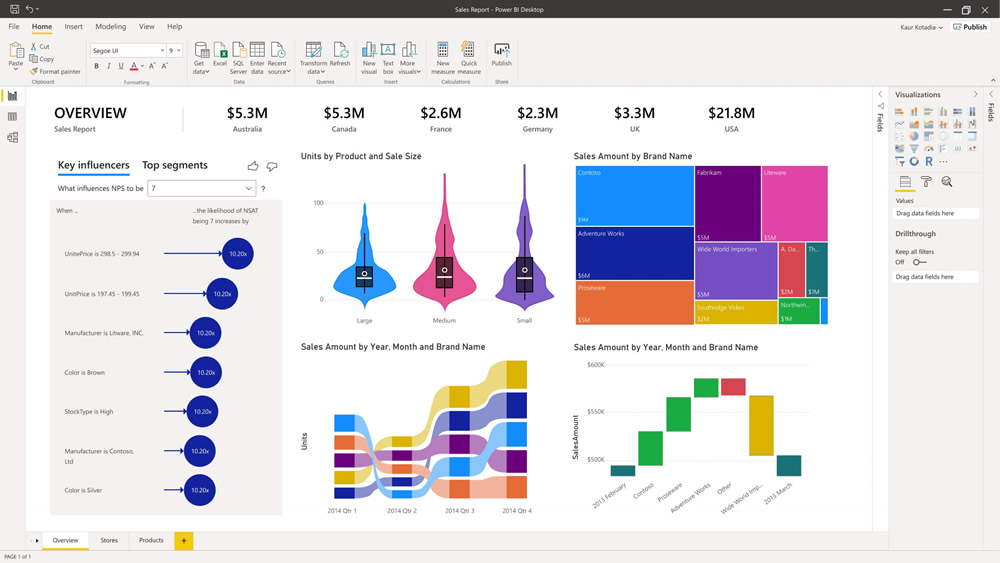 At Deptive, we use Power BI to provide performance insights into customers’ virtual desktop environment, Office 365 user activities, and licensing. We love it!

Power Platform sounds awesome but I thought back to the Microsoft Access sprawl we saw in the 1990s and early 2000s when ‘citizen devs’ tried to solve all business problems using Access, and instead just created a mess. What happens when the new wave of citizen devs create dozens, even hundreds, of Power Apps, Power Automate flows, and Virtual Agents? Will we end up in a world of Power Pain?

According to Dona, no – because the way Power Platform is designed to be used is fundamentally different. This is not a matter of going rogue and solving problems that your IT team won’t. Instead, it’s a collaborative journey between IT and these citizen devs. IT controls who can access the Power Platform and create solutions, and works with the business to foster citizen devs who understand the business problems and how to solve them.

To make that collaborative journey work, Dona recommends creating a ‘centre of excellence’ – a team of people from across the business (in particular IT, finance, HR, legal, and frontline) who work together to design and iterate any solutions.

Doing that well is Downer, one of New Zealand’s largest construction companies. They wanted to build a time tracking Power App for their frontline workers, who used to fill in physical timesheets and hand them in to their manager to send on to central. They knew there was a better way, so got IT on the job.

IT built the initial app through Power Apps before getting a team from across the business to try it out and contribute fields and other features that made sense for them. This process led to several discoveries that IT would never have known about if the frontline workers weren’t contributing to the app themselves – such as how big construction workers’ fingers tend to be! The buttons were initially far too small but, with just a quick change, the app became a lot more user-friendly.

A good centre of excellence ensures that change initiatives are delivered consistently and well, through standard processes and competent staff. But how can you ensure that they’re successful at doing so?

We tend to talk to three different types of people: CIOs, IT people, and business people. Whichever group you fit in, you’re probably wondering ‘so what’s in it for me?’. Let’s take a look at what Dona had to say…

Power Platform lets you reduce your costs while building the apps you need. Because the people using the apps are involved with creating them, you know they’ll solve the problems they actually need solved – making you and your team look awesome.

We get it; no IT person wants yet ANOTHER thing to manage and take care of. But Power Platform is a look at what the future of IT holds. Instead of spending your days managing Windows and Office deployment, you get to go into the business of being an app developer and an app manager – pretty cool! You get to be a cloud architect or a cloud developer – even cooler! That’s far more cred for you, and far better results for the business (which also makes you look awesome).

You’re not a techie and you don’t want to have to tinker with tech – you just want your problems solved. You’ve probably had thousands of people offer up solutions that just cause you more work. So why not co-create tools that actually make your life easier? Be the one to say ‘Hey these buttons are too small for my hands’ or ‘Who the hell uses Excel like that anyway?’ Power Platform’s a cool opportunity to solve your problems without the hassle of having to code apps from scratch. It’s also a great chance to upskill yourself and your team.

At Deptive, we’re pretty excited about the power (excuse the pun) of the Power Platform – mostly because of how excited Dona and the people already using it are. If you’re keen to try it out yourself, check out our Digital Workplace Page.